During the summer, French people take a lot of vacations! Going on 2-4 week family vacations once or twice a summer is a big part of the culture here. Unfortunately, most Americans don’t have the time or money to do the same, probably because vacations mean unpaid leave from work. But here you get paid to take five weeks of vacation time a year! That’s rather nice!

One of the vacations we took this summer was to St. Sorlin D’Arves, about an hour and a half away in the Alps. Matt’s parents own a cute little cabin there in the mountains, and they usually go a couple of weeks every summer and during Christmas. This year we also spent Easter weekend there to get one last trip at the ski slopes!

During the summer it is gorgeous (well, it’s gorgeous all the time!). The weather is sunny and cool, there are flowers everywhere, and there are plenty of fun outdoor activities to keep us busy. Solo loved it there especially. One of the best things about having an active, adventurous companion dog is that you can literally bring him anywhere, and we really do! In the three months that we’ve had him he’s been to the mountains (his favorite place), the beach, rivers, on a bike ride in one of those little kiddy trailers, on a ski lift, on hours worth of train, tram, boat and car rides, on lots of big and little hikes…and he’s done a lot of other things too that I’m forgetting. While we were in St. Sorlin we went on a four-hour hike up one of the mountains near the cabin. It was a little chilly and there was still snow in a couple of places which Solo played in (pictures at the end of this post). We stopped for lunch near the top at a lake. Overall it was a wonderful day!

Two other things we did during our week in the mountains was have a family picnic dinner around some nearby lakes during sunset, and we took a ski lift up to the same area one morning where there was a small “festival” in honor of the annual sheep pilgrimage that happens in St. Sorlin. Three shepherds migrate with their herd of around 1500 sheep from their winter pasture by the sea to their summer pasture in the mountains. We left Shepherd Solo back at the cabin, just in case he got any ideas to herd/chase the sheep! 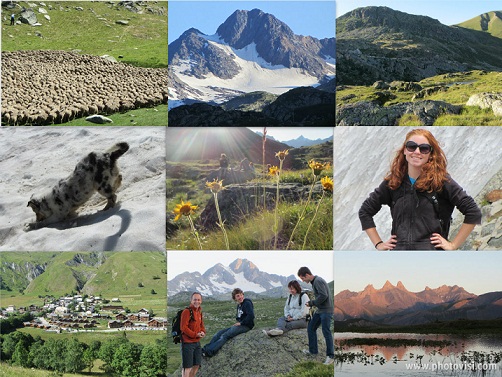 A collage of some of our St. Sorlin experiences!