I have seriously been slacking on my book reviews. I finished Little Women weeks ago and I’m finally forcing myself to type out my thoughts. But rest assured, I loved every minute of this book.

I am still surprised at myself for not having read this book when I was a child, especially because it is right up my alley. Little Women is the type of book that makes me want to have daughters one day, so we can read it together and gush over our favorite moments.  Although I felt oddly guilty at the fact that I didn’t read this book sooner, I did already know the story because I grew up watching the 1994 film version with Winona Rider and Christian Bale. I 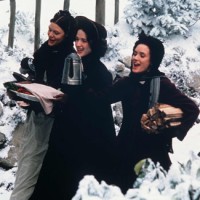 still really love this movie, but I am so glad I finally read the novel because it helped redeem some characters and plot lines for me, specifically Amy March, who I had always regarded as the bratty younger sister who just never matures. But she does mature! The movie just doesn’t elaborate on it. So, moral is: always read the book! Even if you read it afterwards :)

My absolute favorite part of this novel was the relationship between the March sisters. They seemed so real despite the fact that they were ideal relationships. They laughed together, cried together; they fought and they made up; they made sacrifices for each other and they took care of one another. You could see so much love that it really encourages you to love your own family a bit more. So many times during this novel I wished I could have hugged my siblings!

Another aspect of this book that really made an impression on me was the role of Marmee. She’s more than just a mother; she’s also a friend to the March sisters and she’s their guide in every area of life. I loved how much wisdom she showed to the girls, wisdom that I definitely benefited from myself. One of my favorite scenes of Little Women is when Marmee gave Meg some advice about nurturing and caring for her new marriage:

“Guard against the little piques, misunderstandings, and hasty words that often pave the way for bitter sorrow and regret.”

I probably related the most to Meg, the eldest sister and the one who first realized that what she needed in life was not what she had always wanted:

She had not yet learned to know how rich she was in the blessings which alone can make life happy.

I loved the gentleness of Beth, always caring and unselfish. She seems like the least developed of the March sisters, but really she holds them all together:

There are many Beths in the world, shy and quiet, sitting in corners till needed, and living for others so cheerfully that no one sees the sacrifices till the little cricket on the hearth stops chirping, and the sweet, sunshiny presence vanishes, leaving silence and shadow behind.

Amy, Amy, Amy… Like I said before, I used to get extremely aggravated by her brattiness because that’s mostly what the 1994 film version portrayed. But she’s just a typical baby sister who still has to grow out of her selfishness and immaturity, just like we all (hopefully) do. We see less of these traits in Meg, Jo, and Beth because they are already relatively grown up when the novel starts. However, I do love the later chapters that focus on Amy’s growing up because we get to see things from her POV and it’s in those chapters that I realized how much Amy does care about those around her. And for those of you who still ship Jo and Laurie, let me just say that Louisa May Alcott got it right. Amy is by far the much better match for Laurie, and it’s because of her that he finally stopped being lazy and mopey. And this quote from Amy regarding marrying Laurie is what really redeemed her character for me:

“How delightful it is to be able to help others, isn’t it? That was always one of my dreams, to have the power of giving freely, and thanks to you, the dream has come true.”

And of course there’s our heroine, Jo, who helps us all realize that we can attain our dreams with lots of hope and hard work, and who, like me, forgets and remembers this beautiful thought:

“I do think that families are the most beautiful things in all the world!” 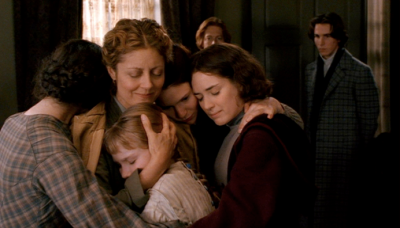 I have always loved this movie! I used to watch it with googly eyes when I was younger (I don’t have googly eyes now, of course…). It’s one of those movies I could watch every day and that has those heart-touching scenes that never fail to make me cry (like when Beth gets her piano! Bravo Claire Danes on bringing out the tears from me). And although I am probably one of the few consistent shippers of Jo and Professor Bhaer, I have always loved them together. That scene at the end is one of my favorites :)

Pros: the acting! All of the locations and costumes, staying relatively true to the original story.

Cons: cutting out some of my favorite character developments (but it’s understandable), like Amy’s maturity and the early relationship between Meg and Mr. Brooke (which I really gushed over in the book).

For those of you who have read (or watched) Little Women, what were some of your favorite moments? How do you feel about Amy and  the “love square” between her, Jo, Laurie, and Professor Bhaer?

11 thoughts on “Little Women: Discovering a Childhood Classic in Adulthood”