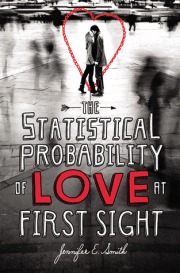 Who would have guessed that four minutes could change everything?

Today should be one of the worst days of seventeen-year-old Hadley Sullivan’s life. Having missed her flight, she’s stuck at JFK airport and late to her father’s second wedding, which is taking place in London and involves a soon-to-be stepmother Hadley’s never even met. Then she meets the perfect boy in the airport’s cramped waiting area. His name is Oliver, he’s British, and he’s sitting in her row.

A long night on the plane passes in the blink of an eye, and Hadley and Oliver lose track of each other in the airport chaos upon arrival. Can fate intervene to bring them together once more?

Quirks of timing play out in this romantic and cinematic novel about family connections, second chances, and first loves. Set over a twenty-four-hour-period, Hadley and Oliver’s story will make you believe that true love finds you when you’re least expecting it.

The Statistical Probability of Love at First Sight by Jennifer E. Smith
Published January 2, 2012 by Poppy
Young Adult, Contemporary Romance
Format: Hardcover; library checkout; 236 pages
Also By This Author: Hello, Goodbye, and Everything in Between, This is What Happy Looks Like, The Geography of You and Me
Goodreads | Amazon | Author’s Website
My Rating: ♥♥♥♥♥

So I’m officially a fan of Jennifer E. Smith now. This is the second book of hers I’ve read in two months that I really, really enjoyed. I guess I should probably give The Geography of You and Me another chance. Maybe I’ll like it better now ;)

About the book…
Yes, it’s a contemporary romance, but surprisingly that wasn’t the deepest part about this novel, and I wouldn’t say it was my favorite part, either. Hadley, our main character is going through a difficult period with her dad after her parents’ divorce. In fact, the only reason Hadley meets Oliver is because she’s flying over to London for her father’s wedding, something she’s dreading.

I totally understand why Hadley’s mad at and hurt by her father, too. He kind of skipped out on Hadley and her mom by moving to England and then having an affair with his now-fiancé. But each chapter Hadley confronts a memory or fear about her father that causes her to reflect on the deterioration of their relationship and what she wishes it would be like, and meeting Oliver at the airport on the way to London is what forces her to do that. Along the way she develops feelings for Oliver, but in my opinion this novel is less about falling in love and more about restoring relationships. There’s one heartwarming chapter in particular that really tugged at my feelings, but I don’t want to say anything more about it to avoid spoilers!

…you love stories about reconciliations.
…you enjoy novels that touch on darker emotions, such as grief, hate, heartbreak, and unforgiveness.
…you like characters who make you laugh (Oliver is an adorable dork).
…you like reading books about parent-child relationships.

“In the end, it’s not the changes that will break your heart; it’s that tug of familiarity.”

The Statistical Probability of Love at First Sight is definitely a re-readable book for me! I loved Hadley and Oliver and the journey they take together. They reminded me that being a teenager is tough and that everyone has complicated relationships with their parents, but that’s not a reason to give up on them because of a falling-out. And on a lighter note, Oliver and Hadley were adorable together! There were several moments in this book that gave me “heart eyes” :)

2 thoughts on “The Statistical Probability of Love at First Sight by Jennifer E. Smith”