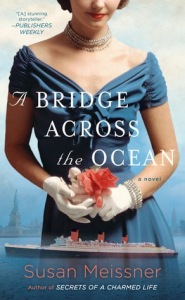 February, 1946. World War Two is over, but the recovery from the most intimate of its horrors has only just begun for Annaliese Lange, a German ballerina desperate to escape her past, and Simone Deveraux, the wronged daughter of a French Résistance spy.

Now the two women are joining hundreds of other European war brides aboard the renowned RMS Queen Mary to cross the Atlantic and be reunited with their American husbands. Their new lives in the United States brightly beckon until their tightly-held secrets are laid bare in their shared stateroom. When the voyage ends at New York Harbor, only one of them will disembark…

Present day. Facing a crossroads in her own life, Brette Caslake visits the famously haunted Queen Mary at the request of an old friend. What she finds will set her on a course to solve a seventy-year-old tragedy that will draw her into the heartaches and triumphs of the courageous war brides—and will ultimately lead her to reconsider what she has to sacrifice to achieve her own deepest longings.

A Bridge Across the Ocean by Susan Meissner
Published March 14, 2017 by Berkley Books
Format: Netgalley e-book; 368 pages
Historical Fiction
Also By This Author: Secrets of a Charmed Life, A Fall of Marigolds
Goodreads | Amazon | Author’s Website
My Rating: ♥♥♥♥

When I first heard about A Bridge Across the Ocean, I was not aware of the paranormal aspects. I thought it was going to be purely historical fiction; however, the fact that Brette is able to see and speak with ghosts did not make this story fantastical. Susan Meissner wrote it in a realistic way that blended well with the other story lines.

I was originally drawn towards this novel because of the cover. This ship on the front looks very similar to the Titanic, and I have been obsessed with the story and legacy of the Titanic since the third grade. This novel has nothing to do with the Titanic, though. It revolves around two women, from Germany and France, surrounding the WWII era. One of the women, Simone, is a subtle part of the Nazi Resistance in France while the other woman, Annaliese, is the unfortunate wife of a Nazi official. They meet aboard the RMS Queen Mary, while traveling to America after the war. Decades later, Brette crosses paths with both women while searching for a ghost on the now memorialized Queen Mary.

“Her life had morphed into an existence defined always by losses.”

…you enjoy historical fiction, especially WWII historical fiction.
…you like books that have twists and unexpected endings.
…you don’t mind reading books with multiple narrators.
…you can enjoy a book even if you connect more with the supporting characters than you do the main character.

“Love is always what you get to keep when someone you care about dies. You will always have that love.”