It’s hard to believe February is upon us. January didn’t necessarily fly by for me, but a lot of things happened in my life and I know February is going to be just as eventful.

So here’s what I was up to last month!

This was a huge surprise for me, because last month I was all upset that I couldn’t find enough time to read as often as I did before finding a full-time job.

Top Ten Tuesday: Book Club Reads – I had so much fun chatting with other bloggers about these books! Tuesday’s posts always bring the best conversations :)

Gilmore Girls – Ok, HUGE surprise to everyone: my dad has gotten hooked on Gilmore Girls. My mom and I started watching the show back in September, but we’ve been taking our time. And this month we started watching it again and my dad watched one episode with us and was completely pulled in. So much so that he’s gotten upset when we watched episodes without him. I feel like I’m in some alternate universe where my dad, whose favorite shows are The Walking Dead and Forensic Files, suddenly enjoys Gilmore Girls. But hey, I’ll take it!

East & West Vlog – A new YouTube series based on Elizabeth Gaskell’s North and South. It’s just starting, but I really enjoy the actress who plays Margaret (also, she goes by Maggie!). I’m looking forward to seeing what the creators have in store for this one.

The Writing Majors – Another new YouTube series, but this one is really unique! It imagines Jane Austen, Emily Dickenson, and Oscar Wilde as grad school roommates. The actors are incredible and the episodes so far have been very enjoyable.

What I Listened To

This month I really dived into audiobooks! With my long commute, I’ve been trying to use the time for books, and it’s only taken me a couple of months to really get adjusted to listening to audiobooks. It’s amazing how weak my listening skills have become over the years. I have to really concentrate to actively listen, but I think it’s a good exercise :)

I also listened to Serial! For those who know me, when I discover something I love, I completely binge watch/read/listen. So, I listened to the first Serial podcast on my way to work last Friday, and I finished it just after midnight on Saturday. I HAD to know how it ended. The story-telling was so captivating that it’s hard to stop listening.

In February I’m Looking Forward To

February To Be Read

I’m still getting through My True Love Gave To Me for my book club (our next read is A Thousand Pieces of You which I’m stoked about!). I’ve also started the last book in the Mara Dyer series, but I’m sad for it to be over so I’ve been taking my time.

What were some of your highlights from January? Are there any books you’re looking forward to reading this month? 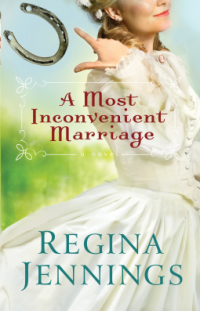 “Sometimes the best gifts aren’t convenient at the time.”

Having fled a difficult home life, Civil War nurse Abigail Stuart feels like her only friend in the world is sweet but gravely wounded patient Jeremiah Calhoun. Fearing he won’t survive, the Confederate soldier’s last wish is that Abigail look after his sickly sister at home. Marry him, return to his horse farm, and it’ll be hers.

Left with few choices, Abigail takes him up on his offer and moves to Missouri after his death, but just as the family learns to accept her, the real Jeremiah Calhoun appears–puzzled to find a confounding woman posing as his wife. Jeremiah is determined to have his life back to how it was before the war, but his own wounds limit what he can do on his own. Still not fully convinced Abigail isn’t duping him, he’s left with no choice but to let the woman stay and help–not admitting to himself she may provide the healing his entire family needs.

I’ve mentioned this before, but I love reading Christian historical fiction novels during the wintertime. Maybe because they’re perfect for reading during Christmas break: quick reads with happy endings and heartfelt morals. A Most Inconvenient Marriage was a great choice for me to read last weekend. I was happily surprised at how much I enjoyed this novel because sometimes this genre can be a bit cheesy and unrealistic. However, Regina Jennings does a fantastic job at making her characters very real. They are not perfect; they have tempers and make poor choices and have a hard time seeing what’s right in front of them. But they are also entertaining, and there were several scenes in this book that had me laughing out loud or covering my face out of embarrassment for the characters (like I said, they sometimes make poor, but funny choices).

This novel takes place at the end of the Civil War. Abigail was a nurse serving the Union Army, and her patient Jeremiah Calhoun, was a wounded Confederate Soldier, who was forced to join the war not to defend slavery but to protect his family and property. The central conflict in this novel occurs when Jeremiah suddenly shows up alive and slightly crippled, leaving a mystery surrounding the identity of Abigail’s deceased patient.

This novel deals with themes of prejudice and forgiveness, themes that can be applied to current events happening in our society today. One of my favorite values I took away from this novel is that, as a community, everybody relies on everybody else. Sometimes they don’t have a choice about being dependent on others, but everyone has a choice on how they treat their neighbors. The characters in A Most Inconvenient Marriage have to overcome their bitterness, their prejudices, and their pride in order to solve the conflicts that are assaulting their community. I love seeing characters overcome their faults as a collective community rather than autonomous individuals.

Read This Book If…:

…you enjoy historical fiction with religious references.
…you’re intrigued by issues of prejudices and civil unrest.
…you’re drawn to books about characters with real faults who make realistic mistakes.
…you’re a romantic at heart (let’s face it, this book is mainly a romance)!

I’ve previously only read a novella by Regina Jennings (An Unforeseen Match, one of four stories in A Match Made in Texas), but I really enjoyed this full length novel a lot more, perhaps because she was able to develop her characters more deeply. This novel takes place over a span of several months, so no one falls in love within a few days or weeks even, and the characters take a realistically long time to overcome their faults. As I’ve often felt with other historical romances, I expected this book to be filled with cheesy clichés, but it wasn’t.

If you’re in the mood for a heartwarming historical romance set in Post-Civil War America, I highly recommend A Most Inconvenient Marriage by Regina Jennings! I don’t think you’ll be disappointed :)