Today’s Top Ten Tuesday meme, created by the lovely ladies over at The Broke and the Bookish, is all about authors we read for the first time in 2014! This was actually a fun and easy post for me since I read a whole bunch of “new to me” authors this year, and I got to meet some of them too! :) 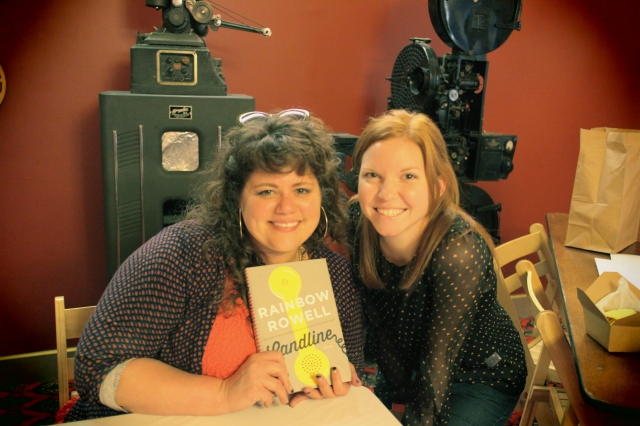 Meeting Rainbow Rowell at YALL Fest was DEFINITELY one of my highlights from 2014!!

Rainbow Rowell – By far my favorite author of the year. I read Attachments back in January after seeing so many recommendations from fellow bloggers. I LOVED IT. I know it came out a few years ago, but I talked about that book to all of my friends because it was so wonderful. Since then I’ve read Fangirl and Landline, and I’ve decided that I prefer Rainbow Rowell’s adult fiction to her YA fiction, but I’m still waiting to read Eleanor & Park :)
Veronica Roth – This year I also read the Divergent series. It wasn’t my favorite series, but I did like the world Veronica Roth created (and I really liked the first movie!).
Lauren Morrill – My second favorite author I discovered this year! She wrote Meant to Be and Being Sloane Jacobs and if I could give her an award it would be for prettiest book covers one & two.
Ann Brashares – This year I read the entire Sisterhood of the Traveling Pants series, and I especially loved the most recent 5th book. When I met Ann Brashares at YALL Fest (and totally fangirled), I got to chat with her a bit about it and she was really happy to know that I enjoyed the last book since so many people don’t want to read it because it’s sad. I had her sign a copy of her new book, The Here and Now (which also has a gorgeous cover), and I’m excited to read it soon!
Louisa May Alcott – I still don’t know why I waited so long to read Little Women, but I’m so glad I finally did this year! I’m looking forward to reading Alcott’s other novels as well.
Morgan Matson – After hearing so many good things about Since You’ve Been Gone, my book club voted to read this earlier this summer and we all fell in love! Since then I’ve read all of Matson’s other novels, I’ve laughed & cried, and now I can’t wait for her to publish more!
Jennifer E. Smith – It is very rare for me to read a book by an author, not really like it, and then decide to give out a second chance and read another of his/her novels. I’m glad I did this with Jennifer E. Smith. I read The Geography of You and Me a few months ago and felt “Ehh” about it. But then I checked out This Is What Happy Looks Like on audiobook and I actually rather enjoyed it. I think I’ll give The Statistical Probability of Love At First Sight a chance next.
Cindi Madsen – I won a copy of Madsen’s Falling For Her Fiancé a couple of months ago and adored it! I speed read it and then bought the two sequels and finished them in roughly two days. If you like clean, funny, romances, Cindi Madsen writes some pretty great ones :)
Harper Lee – I was never assigned to read To Kill A Mockingbird, but maybe that’s a good thing, because when I finally felt like reading it this year, I loved it. I wrote all about my feelings on the novel here.
Huntley Fitzpatrick – I had been eyeing My Life Next Door for months and maybe it was delayed gratification, but I loved that book so much more than I thought I would. It’s definitely not all that it seems; it’s better :)

What are some authors you read for the first time this year? I’d love some recommendations!

This week’s Top Ten Tuesday meme, brought to you by The Broke and the Bookish, is about sequels! Unfortunately, I don’t read very many series, but there are lots of series I want to read. So I’m altering this meme to include series I’ve already started and ones I’ve been wanting to start as well.

Where She Went by Gale Forman – Earlier this year I read If I Stay, and although I liked it, it is a heavy book with lots of feels. I’ve really been wanting to read Where She Went since then, but I’m saving it for when I’m in the mood for an intense read. Where She Went is told from Adam’s POV which is exciting!
The Boy Most Likely To by Huntley Fitzpatrick – I had to use the cover for My Life Next Door since the cover for the sequel hasn’t been released yet! This one is coming out sometime next year and I’m really excited for it. My Life Next Door really bested my expectations, and I know its sequel will be amazing as well.
Clockwiser by Elle Strauss – Clockwise was one of my favorite reads from last year. It’s a YA time traveling story that was really fun and actually inspired me to write a short story last year. Clockwiser continues where it’s predecessor left off, and the time-traveling becomes even more dangerous when the main character’s brother gets transported back to Civil War America…and enlists!
Silenced by the Yams by Karen Cantwell – This is a murder-mystery-romcom series that I really enjoy. The first book in the series, Take the Monkeys and Run, is actually the first book I bought when I received my first Kindle. I read the sequel, Citizen Insane, last year and I’ve been wanting to finish the series ever since. I love this romance series because it focuses on the main character trying to fix her relationship with her husband.
The Scorch Trials by James Dashner – I haven’t actually read The Maze Runner yet, but I broke my cardinal rule by seeing the movie earlier this month (gasp!). I will get around to reading this series, I just need to carve out time to marathon 4 books.

Virals by Kathy & Brendan Reichs – I bought the first book in this series for my husband while I was at YALL Fest. I’ll probably read it too, since I love Bones and this book is told from the POV of her great-niece.
The Eye of Minds by James Dashner – Another book I bought for my husband at YALL Fest, this series is about an internet gaming kidnapper. Yep, that looks really interesting!
The Evolution of Mara Dyer by Michelle Hodkin – I haven’t read the first book in this series, The Unbecoming of Mara Dyer, but while I was at YALL Fest I bought the second book (the first was sold out) because my friend wanted to get her copies signed. Michelle Hodkin was so nice and took several minutes speaking with each of her fans. This book looks dark and mysterious, probably something I should have read during Halloween, but it’s on my Christmas wish list so if someone doesn’t gift it to me I’ll be buying a copy myself.
Broken Hearts, Fences, and Other Things to Mend by Katie Finn – I’ve been itching to read this series. The second novel Revenge, Ice Cream, and Other Things Best Served Cold, comes out next year. Katie Finn is Morgan Matson’s pen name, and I know these books differ from her other ones, but I have no doubt I’ll like these ones just as much.
A Thousand Pieces of You by Claudia Gray – I haven’t read this book yet, and I couldn’t even tell you what it’s about, but the cover is gorgeous and it has a lot of my favorite genres AND there are 2 sequels in the works according to Goodreads, so I’m adding it to my TBR. I think I put this on my Christmas wish list, too!

What are some sequels (or series) you’re excited about reading? Clearly a lot of the sequels on my list have been out for a while–do you have any recs for current series?