One pitch-black London morning, a ghoulish little man tramples a young girl and continues heedlessly on his way. Caught by a passerby and returned to the scene of the crime, the man is forced to pay £100 in restitution. He produces ten pounds in gold and a check for the remainder. Curiously, the check bears the signature of the well-regarded Dr. Henry Jekyll. Even stranger, Dr. Jekyll’s will names this same awful and mysterious little man, Mr. Hyde, as the sole beneficiary. Troubled by the coincidence, Dr. Jekyll’s attorney visits his client. What he uncovers is a tale so strange and terrifying it has seeped into the very fabric of our consciousness.

I was really looking forward to reading this spooky gothic classic by Robert Louis Stevenson, especially during the Halloween season. Unfortunately, I was sadly disappointed. While the novel’s plot and characters were intriguing, I found the writing style incredibly boring. It took me at least two weeks to finish a three hour audiobook, mainly because I kept zoning out and losing interest as the story went on.

Everyone knows the basic plot of Dr. Jekyll and Mr. Hyde: a curious scientist drinks a potion that turns him into a murderous lunatic, and overtime Dr. Jekyll becomes consumed by this psychotic half of his split-personality. It’s a fascinating plot for a story, which is why Dr. Jekyll and Mr. Hyde remains so popular over a century later. While I did enjoy the beginning and the end of this novel, I felt that the middle dragged on without very many exciting things happening, aside from some very lengthy passages of dialogue that could have used a sentence or two of description.

I would recommend this book to fans of gothic lit and classic sci-fi (namely H.G. Wells’s novels), but I wouldn’t necessarily recommend an audiobook version unless the narrator is extremely entertaining. I believe the version I listened to was from Librivox.

You May Also Enjoy:

The Invisible Man by H.G. Wells 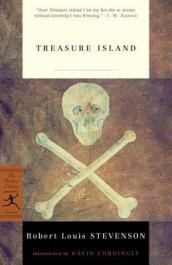 Robert Louis Stevenson’s cherished, unforgettable adventure magically captures the thrill of a sea voyage and a treasure hunt through the eyes of its teenage protagonist, Jim Hawkins. Crossing the Atlantic in search of the buried cache, Jim and the ship’s crew must brave the elements and a mutinous charge led by the quintessentially ruthless pirate Long John Silver. Brilliantly conceived and splendidly executed, it is a novel that has seized the imagination of generations of adults and children alike

It probably takes a good blend of ignorance and luck to avoid finding out spoilers for a 134 year old book, but I made it 27 years without knowing anything about Treasure Island, except for the fact that it involved treasure, an island, and it featured pirates. I had never read this book or its synopsis before, nor had I seen any movie adaptations (no, not even the Muppets version). Of course, I had heard of Long John Silver, but I didn’t even know he was a prominent character in this book until he was introduced several chapters in.

Disclaimer: if you are a rarity like me who doesn’t know anything about Treasure Island and would like to keep it that way, you may want to skip down to the “Read this Book if” section, to continue avoiding spoilers :)

I liked not knowing anything about this novel beforehand because that really raised the suspense level for me. I never knew who to trust and I was constantly worried about characters dying. I applaud Robert Lewis Stevenson for romanticizing pirate stories, and I wonder if even he anticipated or expected the influence his novel would continue to have long after his death.

As intrigued as I was by this story for the first four parts, once they arrive on the island and conflicts begin escalating, I started detaching from the story. I think I was put off by Long John Silver’s character. From the very first encounter with him, I didn’t trust him, but there were several times when I wanted to. I remember gasping in shock when the mutiny is uncovered by our narrator halfway through the story, but I always expected Silver to be the villain in disguise. What really confused me was how he could kill several crew members and threaten the lives of the captain and the doctor and still get away scot-free at the end of the book, while the men he persuaded into mutiny were either killed or marooned on Treasure Island.

Maybe I wasn’t reading closely enough? Am I alone in feeling conflicted over the conclusion of Treasure Island? It ruined the ending for me quite a bit, which is why I only gave the book a 3-star rating.

…you wish you were a pirate! Or you at least enjoy pirate and/or adventure stories.
…you are fascinated by the way humans (and fictional characters) react when placed in stressful life-and-death situations, especially when profit is involved (if you like Lord of the Flies and similar novels, you will probably appreciate Treasure Island as well).
…you like reading pioneering novels that have birthed entirely new genres.
…you enjoy reading books with reliable narrators, even if the other characters are not as trustworthy.

Since I’ve never seen a single film adaptation of Treasure Island, I have no idea which one is the best. Any recommendations? If you’re reading this, you should know that I am not the biggest Muppets fan, but if that one is generally considered one of the best versions, I will consider watching it :)