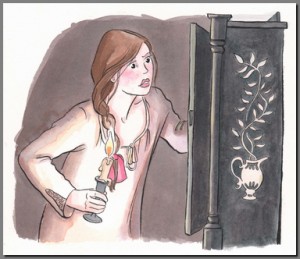 Yes, Catherine. The middle of the night is definitely the perfect time to inspect some creepy old cabinet.

I was filled with a bitter-sweet feeling after finishing Jane Austen’s Northanger Abbey last month; bitter because it was the last Austen novel I had yet to read and sweet because I finally found the Austen heroine I most resemble. Yes, I am Catherine Morland: young, adventurous, naive at times, and above all, impressively talented at scaring myself.

Earlier this year I read Shannon Hale’s novels Austenland and Midnight in Austenland. The first novel borrows extensively from Pride and Prejudice, but Midnight in Austenland is a partial re-imagining of Northanger Abbey, so of course that means I wanted to stay up until 2 A.M. reading it. This is the perfect hour to read gothic novels: the moon is high and bright in the sky, everyone else in my apartment complex is fast asleep, and it’s either eerily quiet outside or there’s that one pair of stray cats defending their territories somewhere far off.

For those of you unfamiliar with Northanger or Midnight in Austenland, without spoiling too much, both Catherine Morland and Charlotte Kinder convince themselves that a gruesome murder has been committed and then become obsessed with finding (mainly fabricating) evidence and motives. So, while reading Midnight in Austenland, I heard (or imagined) a noise somewhere in my apartment and immediately my heart started pounding. Of course this noise can’t be nothing, and although, unlike our gothic heroines, I didn’t immediately imagine a murder scene, I did use the flashlight on my phone to quickly scan my bedroom to make sure nothing was lurking about. And that is the moment I knew I was Catherine Morland (despite the fact that at that point I hadn’t even read Northanger Abbey yet).

Northanger Abbey was published posthumously, roughly four months after Austen’s death, but interestingly enough it was actually the first novel Austen completed. It has many similarities to Austen’s other novels, for example it is a coming-of-age tale that includes deceptive “gold-digger” type characters, exaggerates inappropriate behaviors, and discusses the relationship between love, marriage, and fortune. However, this novel reads a lot differently than Sense and Sensibility or Pride and Prejudice, which were Austen’s first two published novels. I felt that the characters were somewhat flat and didn’t possess complex personalities, but this was probably Austen’s design in wanting her novel to be more plot-driven. She’s very much criticizing gothic literature in her unique comical way, and if she knew how badly I spooked myself while reading Northanger Abbey, she’d probably smirk and shake her head at me.

Besides Catherine Morland, we also have the witty and always-amiable Mr. Henry Tilney who unintentionally provokes Catherine’s overactive imagination, as well as the persistently arrogant John Thorpe, who literally had me muttering my annoyances out loud. Well done Austen for making a character seem both flat and unbearably annoying at the same time.

Like I usually do after reading most classic novels, I watched the film adaptation to Northanger Abbey as well. Fun fact: Mr. Henry Tilney is played by JJ Field, who also plays the male lead in the film adaptation of Austenland. I think I preferred his light-hearted and teasing nature as Mr. Tilney, but maybe that’s just the Catherine in me speaking ;) Either way, I enjoyed both films, although Austenland is typically cheesy.