Some of you may know, but for our 1st anniversary and Christmas, my parents paid for us to stay at Disneyland Paris for 3 days!! We’re both really big Disney geeks and I hadn’t been to this park yet so I was very excited to see it. It’s not as big as Walt Disney World, but there are some unique attractions there that I absolutely loved. So brace yourselves because this will probably be my longest blog yet (but there will be lots of pictures, too!).

So Paris is about 6 hours north of where we live, which is A LOT of driving time for natives here. In the U.S. 6 hours is nothing. It took 5 hours just to get from FSU to my home in Palm Bay, and I would visit just for the weekends. Taking the train would have been the more time reasonable option, but it is SUPER expensive to take the train: so driving it was! We left just before 7am and arrived at our hotel at 12:30pm. We stayed at a western-themed hotel called Hotel Cheyenne, and it wasn’t bad actually. It hasn’t been renovated in a while, but nothing was falling apart or anything. One of my favorite things about the resorts here in Paris is that they had breakfast that you had to make reservations for, so this actually made us get up early enough to make Extra Magic Hours at 8am. But every night we were so exhausted, we were sleeping by 10:30 at the latest. We stayed in the Kidani Village at Animal Kingdom Lodge when we went to WDW for our honeymoon, but they don’t have breakfast since it’s one of the villas. 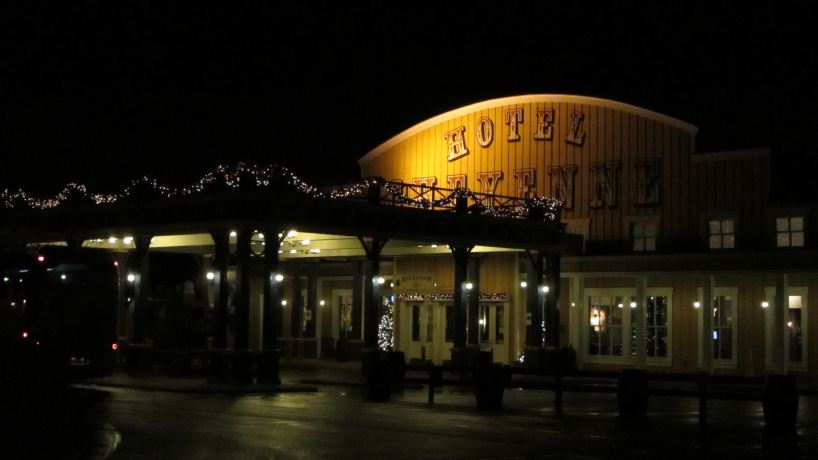 You can sort of make out the Christmas decorations.

The parks closed between 6 and 7pm the days we were there, so that gave us about 2 and a half days in the park total. The first day we spent at Disneyland Park, which is just like Magic Kingdom except Tomorrowland is called Discoveryland and they have Sleeping Beauty’s castle instead of Cinderella’s. It rained most of the time we were there but not too hard and Disney is still fun even in the rain. It wasn’t as packed at WDW is at this time of year, so we were able to do our favorite rides multiple times (like Buzz, which we did 5 times!). The castle is gorgeous. It’s smaller but I think it’s prettier than Cinderella’s castle. 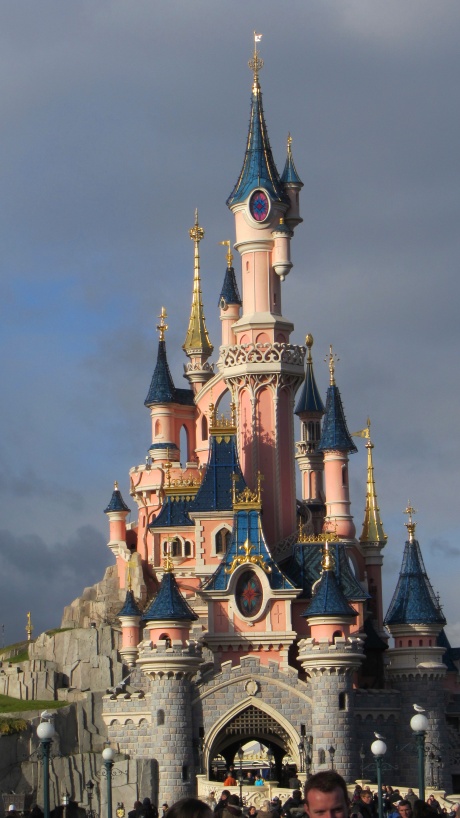 Here is a list of some of the most memorable moments for me:

– Stitch Live! I didn’t want to talk about this one first, but it was my favorite thing and I can’t hold back! For those of you who have been to Turtle Talk with Crush at EPCOT, this is basically the same thing except with Stitch from Lilo & Stitch. He talks to adults as much as he talks to the kids, and he picked on me and Matt while we were there! It was hilarious–first he told me I was pretty and then when he found out I’m married he said, “Stand up, Maggie’s husband,” and made Matt get up and fight for me. But Stitch won because Matt couldn’t make two arms pop out from his sides haha. Then Stitch said, “Maggie and Stitch for-ever,” and later when he was leaving he stuck his tongue out at Matt and said that he loved me! It was so much fun, I love those type of attractions. 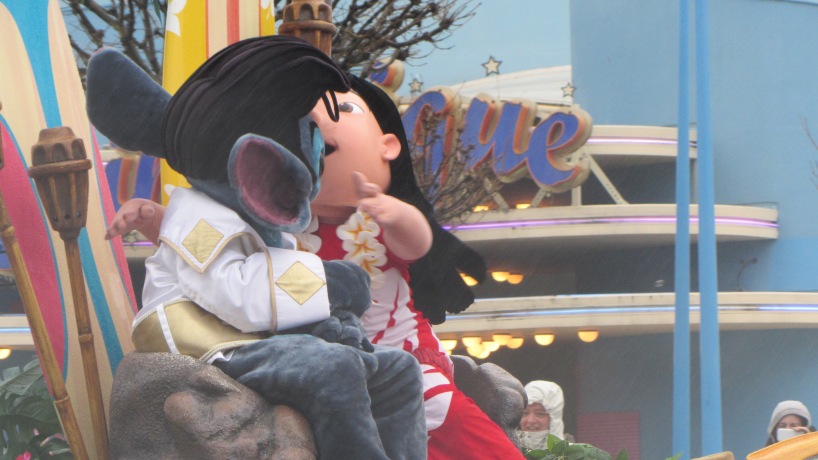 Not a good picture but the only one I had of Lilo & Stitch was from the cars parade.

– Crush’s Coaster This was their Finding Nemo ride and it was a lot like Space Mountain. First you ride by Nemo and some friends and then you go through the boat with the sharks before you shoot out into the EAC, which is all dark and you twist around in your turtle shell. It was a lot of fun and definitely one of the biggest attractions. 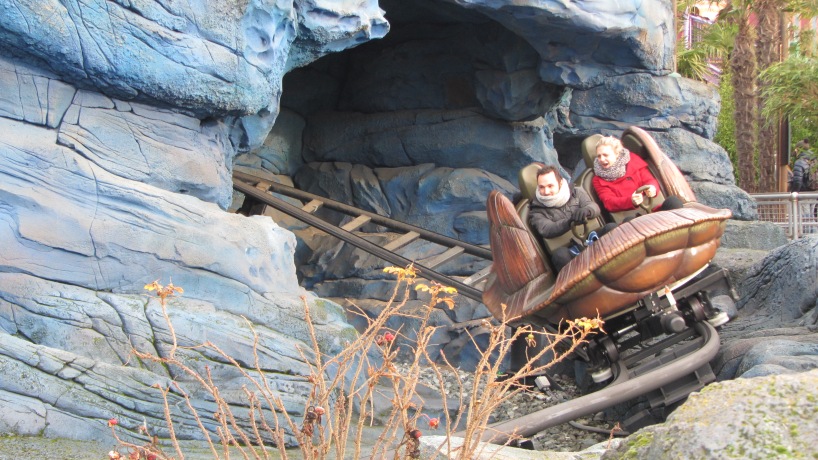 We sat in the back both times that we rode this ride.

– RC Racer This is basically a pirate ship ride but with the race car from Toy Story. I usually hate those rides but this time you’re harnessed in so you don’t move around as much. Even in the rain it was fun! 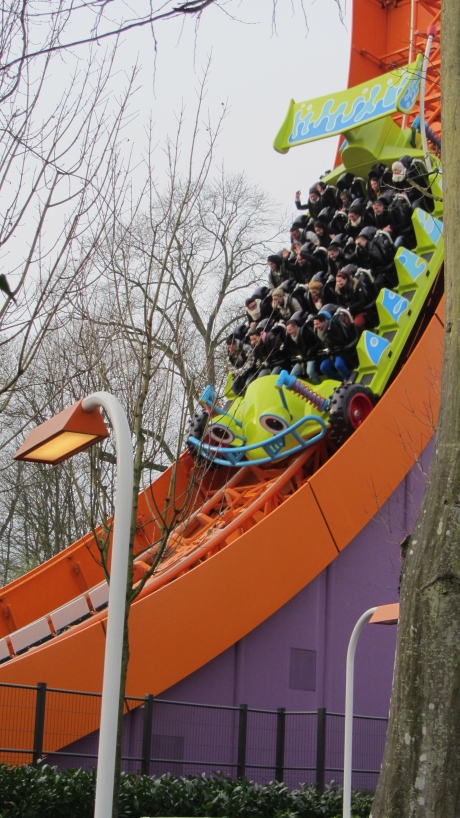 This was so much fun! We even sat in the front row the second time.

– Sleeping Beauty’s Castle you can actually go into the castle where they tell the story of Sleeping beauty with stained glass and tapestry. They also have a dragon’s lair in the dungeon where you can see Maleficent. 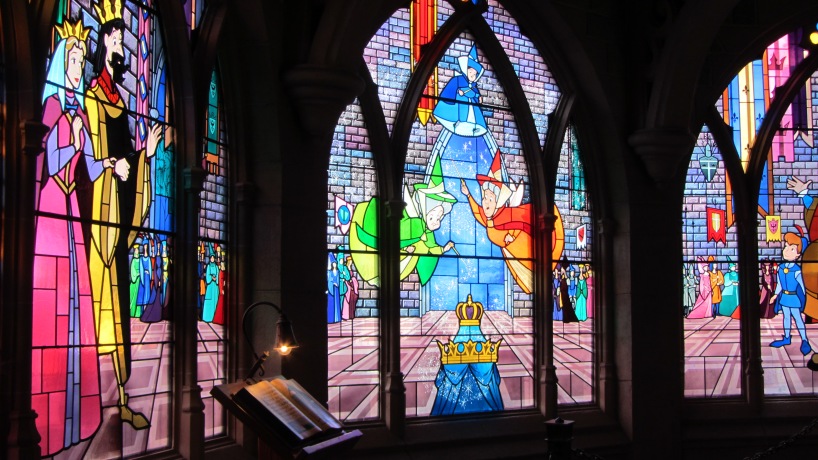 Stained glass windows inside the castle. 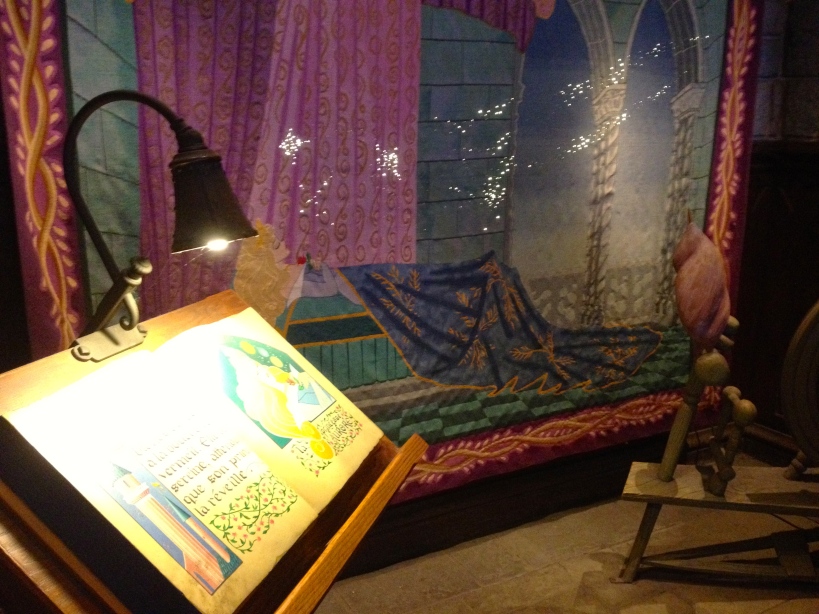 The Sleeping Beauty tapestry had lights that twinkled and faded away!

– Star Tours it’s the original ride which was nice to experience again even though the new one in Orlando is incredible. 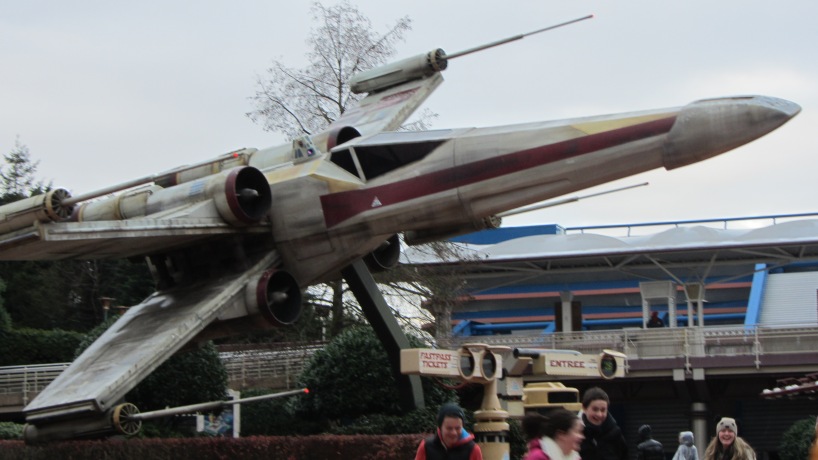 On our way to Endor!

– It’s a Small World this ride was amazing. It’s newer so it’s prettier and they had it Christmas themed as well. The good thing about Disneyland Paris is that everything is very colorful because it rains a lot here, especially in the wintertime. 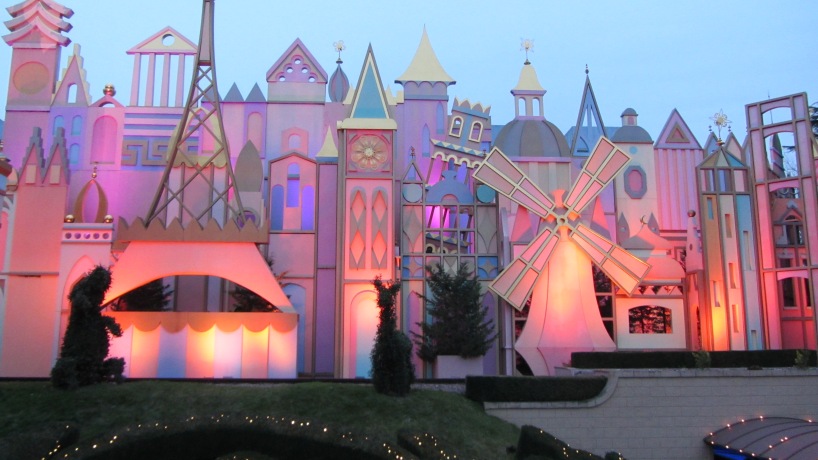 Colorful even at nighttime!

– Pirates of the Caribbean this is Matt’s favorite ride and it’s better than the one in Orlando because they have two drops and it goes through the Blue Lagoon restaurant which we were able to eat lunch at on Wednesday. There’s no Jack Sparrow cameo, but they have him at a character spot nearby. 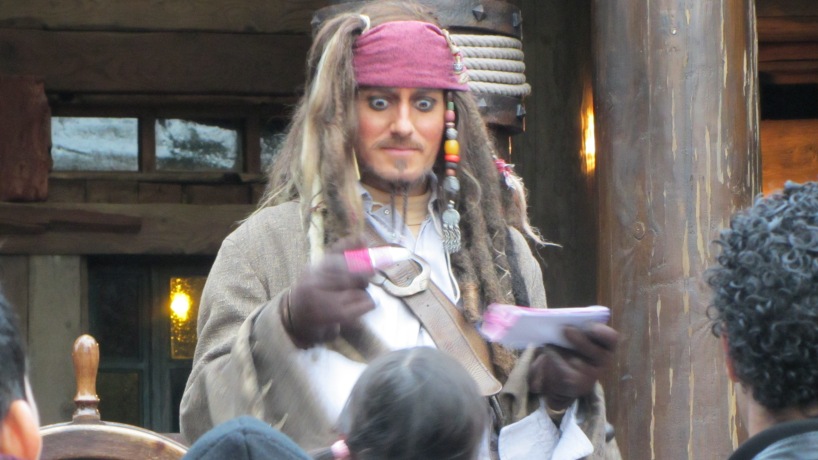 I just love the look he makes here. 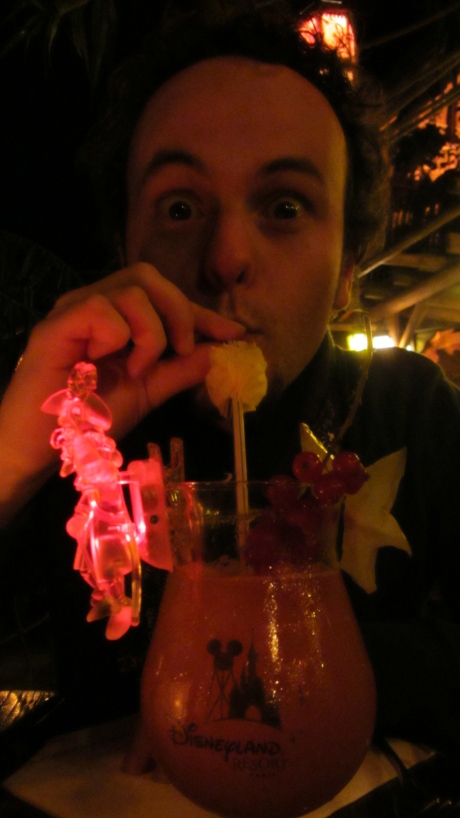 – Disney Dreams light show this doesn’t compete with Wishes, but it was amazing in its own way. They are not allowed to do a lot of fireworks here (because the Parisians don’t like it), so they do a mixture with fireworks and a water/light show similar to Fantasmic. It was really nice to see because they do a lot of different songs that they don’t do at WDW, like songs from Hunchback of Notre Dame, Princess and the Frog, Mary Poppins, etc. And Peter Pan and Tinker Bell are the main characters for the park so Pan’s shadow was all over the place. We watched it twice but left while it was starting Thursday night. 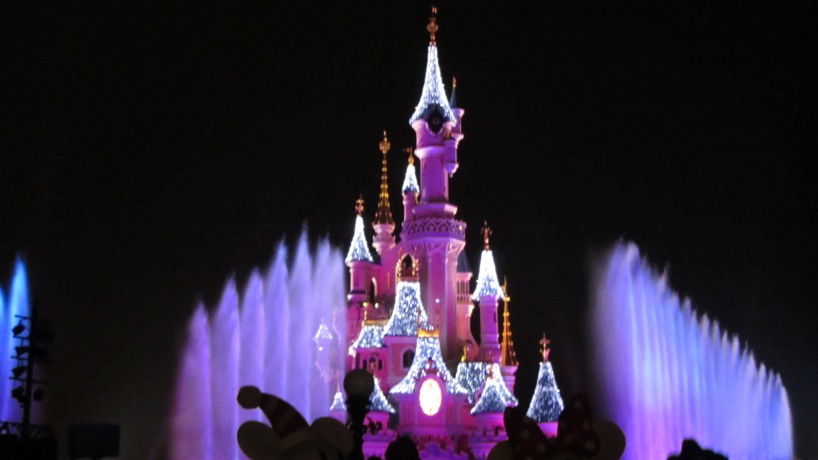 It’s blurry, but this is when they were prelighting the castle before the show started. 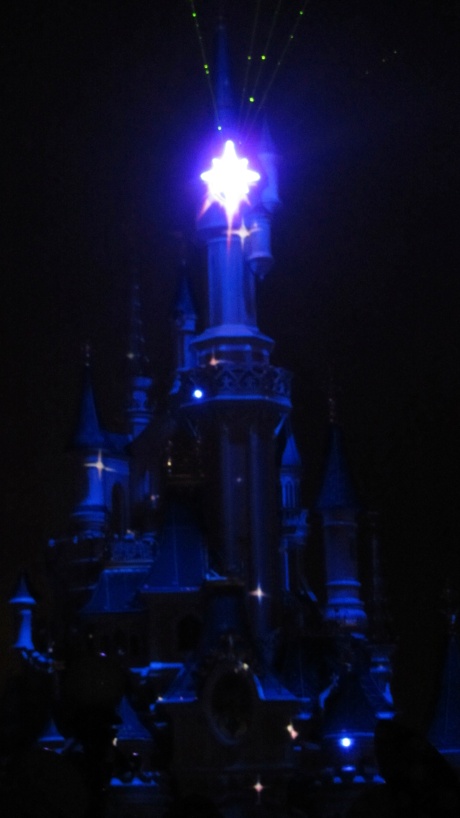 I loved the twinkling stars all over the place. 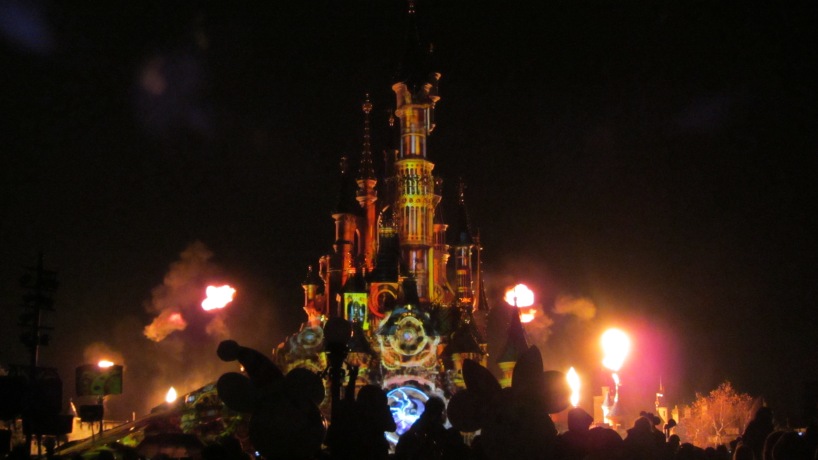 During “I’ve Got Friends On the Other Side” – there were gears turning everywhere. 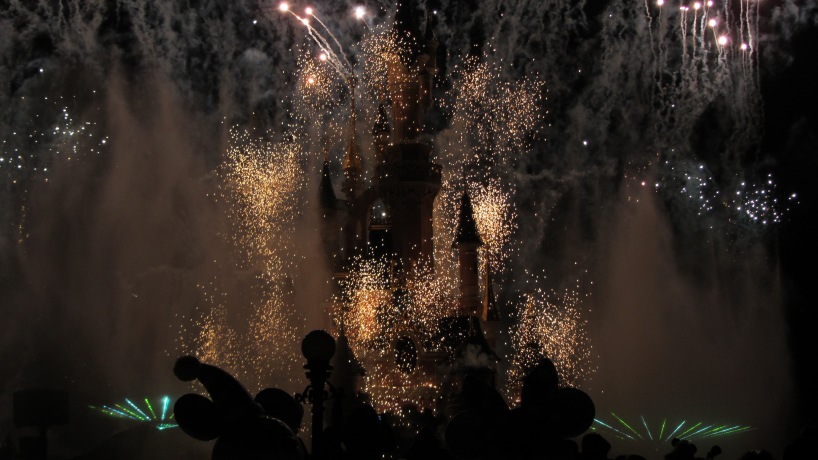 Not the best picture but I really like the fireworks here. 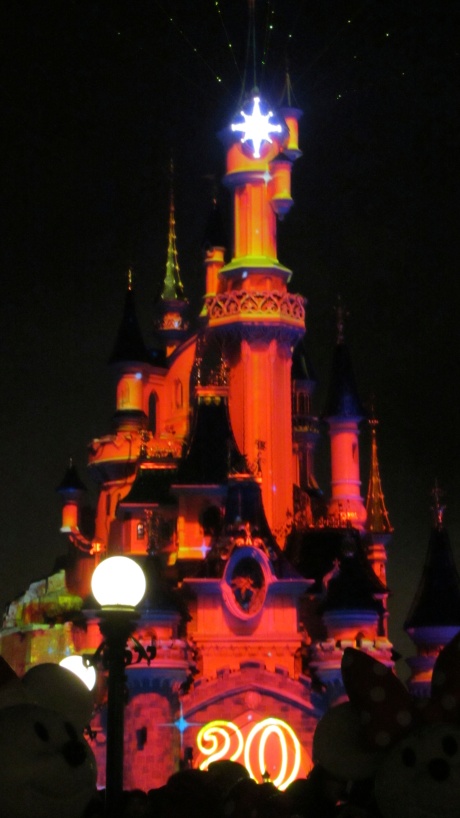 It’s the 20th Anniversary of Disneyland Paris this year.

All in all it was a magical trip and even the downsides (like the awful smelling popcorn that I won’t even write about) were overwhelmed by the fun things (like crepes and being flirted on by Stitch). It was a great vacation and we already started planning our next trip! 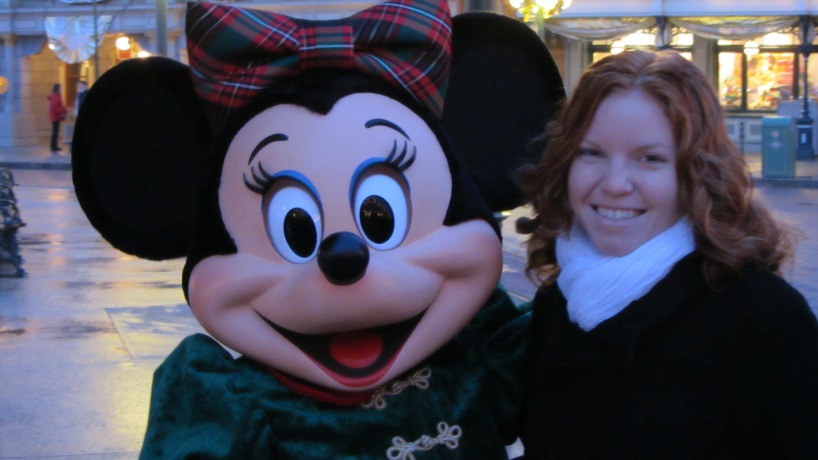 Minnie was there for Extra Magic Hours! I loved her dress. 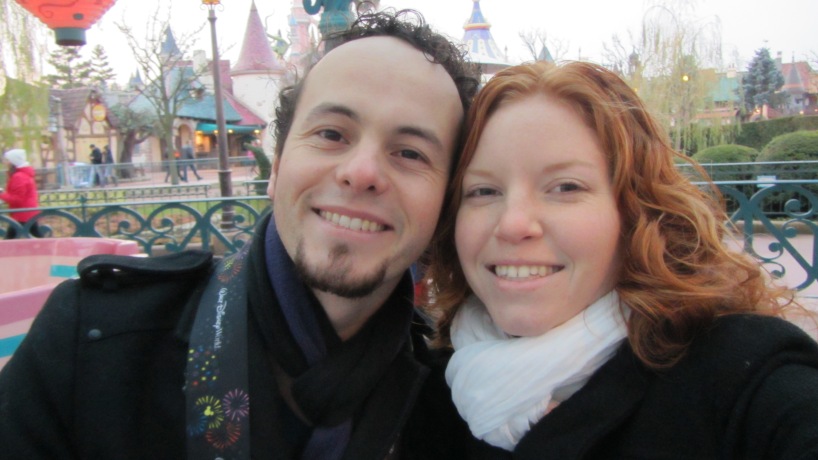 Matt and I in the teacups.