As previously mentioned, I am participating in a Jane Eyre read-along this month, so for those of you who have not read at least the first 11 chapters of the novel, be prepared for some spoilers.

This is my first time reading Jane Eyre, and before I started I had absolutely no idea what it was about, and had only heard mixed reviews on whether I should like it or not. Typically I do enjoy Gothic literature, especially Gothic short stories (A Rose for Emily, The Cask of Amontillado, and The Lottery are just a few of my favorites), but I had always assumed that Charlotte Brontë’s novel would be similar to her sister Emily’s Wuthering Heights, which I have continued to like less and less since I read it almost 9 years ago, mainly because of how awful the characters are to one another.

And so when I finally started reading Jane Eyre last night, I was rather discouraged before I even reached the third chapter, and this can all be contributed to the horrid Reed family, who have probably succeeded in winning the “Quickest Character(s) to Earn My Undying Hatred” Award (move over, Dolores Umbridge).

But in all seriousness, John Reed MUST have been George R. R. Martin’s inspiration for Joffrey Baratheon. Consider this lovely (and somewhat lengthy) passage, which serves as our introduction to Jane’s malicious cousin:

“What do you want?” I asked, with awkward diffidence.
“Say, ‘What do you want, Master Reed?'” was the answer. “I want you to come here;” and seating himself in an arm-chair, he intimated by a gesture that I was to approach and stand before him.
[…]
Habitually obedient to John, I came up to his chair: he spent some three minutes in thrusting out his tongue at me as far as he could without damaging the roots: I knew he would soon strike, and while dreading the blow, I mused on the disgusting and ugly appearance of him who would presently deal it. I wonder if he read that notion in my face; for, all at once, without speaking, he struck suddenly and strongly. I tottered, and on regaining my equilibrium retired back a step or two from his chair.
“That is for your impudence in answering mama awhile since,” said he, “and for your sneaking way of getting behind curtains, and for the look you had in your eyes two minutes since, you rat!”
Accustomed to John Reed’s abuse, I never had an idea of replying to it; my care was how to endure the blow which would certainly follow the insult.
“What were you doing behind the curtain?” he asked.
“I was reading.”
“Show the book.”
I returned to the window and fetched it thence.
“You have no business to take our books; you are a dependent, mama says; you have no money; your father left you none; you ought to beg, and not to live here with gentlemen’s children like us, and eat the same meals we do, and wear clothes at our mama’s expense. Now, I’ll teach you to rummage my bookshelves: for they ARE mine; all the house belongs to me, or will do in a few years. Go and stand by the door, out of the way of the mirror and the windows.”
I did so, not at first aware what was his intention; but when I saw him lift and poise the book and stand in act to hurl it, I instinctively started aside with a cry of alarm: not soon enough, however; the volume was flung, it hit me, and I fell, striking my head against the door and cutting it. The cut bled, the pain was sharp: my terror had passed its climax; other feelings succeeded.
“Wicked and cruel boy!” I said. “You are like a murderer–you are like a slave-driver–you are like the Roman emperors!”
[…]
“What! what!” he cried. “Did she say that to me? Did you hear her, Eliza and Georgiana? Won’t I tell mama?[…]” 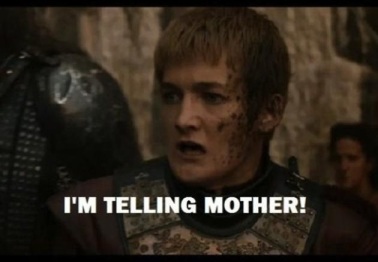 Fortunately, after reading through Chapter 11 I can safely say that the book has greatly improved, although some of the chapters did seem to drag on a bit. I did however love the goodbye scene between Jane and Helen Burns. It was so beautiful and emotion-filled. I love heart-wrenching stories like that. I know it’s pathetic, but those types of emotions always have a greater impact on me. I am sad to lose Helen as a character, though…she was so good and kind-hearted. I admired her forgiving spirit, and the fact that she never held a grudge ever. I know that if I had to pick between which of these girls I am most inclined to be like, it would without a doubt have to be Jane. I was pretty convicted in that regard. But through Helen and Jane’s relationship I was able to relate to our heroine and find a connection with her, which is an essential factor in me being able to like the novel. This is also why I classify myself as being a part of the minority of Austenites who love Fanny Price/Mansfield Park.

So I can truthfully say I am now eagerly looking forward to the rest of Miss Eyre’s story, as long as there are no more appearances from the Victorian Joffrey (and if there are, all of you who have already read Jane Eyre are encouraged to laugh pitifully at me).

But I really do love modern-classic crossovers, so here are two more little funny gems for you all: 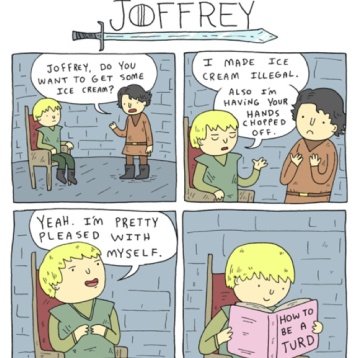 “How to be a Turd” written by John Reed 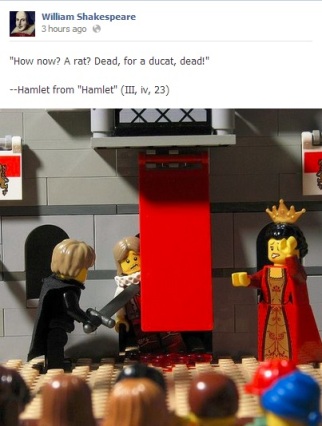