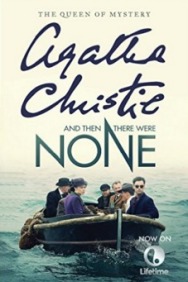 First, there were ten – a curious assortment of strangers summoned as weekend guests to a private island off the coast of Devon. Their host, an eccentric millionaire unknown to all of them, is nowhere to be found. All that the guests have in common is a wicked past they’re unwilling to reveal – and a secret that will seal their fate. For each has been marked for murder. One by one they fall prey. Before the weekend is out, there will be none. And only the dead are above suspicion.

And Then There Were None by Agatha Christie
Published November 6, 1939 by Collins Crime Club
Format: e-book; 264 pages
Classics / Mystery
Also By This Author: Murder on the Orient Express, Murder at the Vicarage
Goodreads | Amazon
My Rating: ♥♥♥♥♥

Last month (I think it was last month, I’m so far behind on my reviews!) I read Agatha Christie’s most famous book, And Then There Were None in an entire day. I seriously could not put it down. This was my second Agatha Christie novel and I’m so glad I finally read this one because I loved it!

The author’s introduction had me intrigued from the start. I tried to be extremely observant so I could figure out some clues along the way, but I did not want to discover “whodunnit” before the big reveal. I thought it would be more suspenseful that way, and it was! Although I did not guess who the killer was, I did have some inklings along the way. I won’t say any more because I don’t want to spoil anything.

…you enjoy reading books that keep you on the edge of your seat.
…you’re into mysteries, especially murder-myseries.
…you like stories that are told from multiple points of view.
…you love thrillers!

The biggest reason why I wanted to read this novel was because of the recent BBC adaptation starring Aidan Turner (of Poldark fame) among some other lovely actors such as Sam Neill and Miranda Richardson. The adaptation itself was very spooky and even more suspenseful than the book, which surprised me since at that point I already knew what happened. The story reached the same outcome, but the means the miniseries creators took to get there differed slightly from the book. But it worked very well, in my opinion.

I have yet to watch any other adaptations but I was very satisfied with this one. Here’s the trailer if you’re interested!

7 thoughts on “And Then There Were None by Agatha Christie”