Hello, and happy Saturday! Today I’m sharing some of my favorite recent reads with you.

Are you a fan of seasonal reading? I always seem to prefer certain genres or story lines during specific seasons. In the fall, I tend to read classics, especially the brooding and Gothic ones. In the winter, I find myself cosying up to historical romances. During the spring, I love to read L. M. Montgomery novels, or anything that makes me feel alive and in love with everything. And during the summer, I usually binge young adult novels or humorous romances.

Here are some of my favorite recent summer reads: 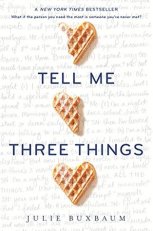 Synopsis: Shortly after her mom passes away, Jessie moves to a new town, where her school is full of bullies, her new stepmom and stepbrother aren’t very hospitable, and where loneliness threatens to choke her. The only person who seems to understand is a mysterious online penpal named Somebody Nobody, who quickly becomes Jessie’s lifeline as she copes with grief and high school.

My Thoughts: This novel is full of dark and light bursts of emotion. The penpal aspect is fun and intriguing, and Jessie is a realistic teenager, easy to relate to whether or not you’ve experienced grief like she has. Although the book opens with Jessie battling through the black holes of loneliness and grief, it ends will some uplifting feelings that left me with heart eyes for days.

Can You Keep a Secret? by Sophie Kinsella

Synopsis: Emma has a huge heart, a lot of secrets, and a big mouth, which unfortunately shows itself when she’s overcome with terror. During a particularly turbulent plane ride on the way back from a disastrous business trip, Emma spills all of her most embarrassing and hilarious secrets to the stranger sitting next to her. The plane is surely going to crash, so who cares, right? But then the plane lands safely and the stranger, who now knows the most private details of Emma’s life, turns out to be her boss (the CEO, actually).

My Thoughts: This book is dangerous to read in public, and not for the reasons you might suspect. You will laugh out loud until you cry. I did this so many times, my husband kept giving me strange looks. This book is hilarious, and has some great messages about being proud of who you are, knowing what you deserve, and not giving a crap about what others think of you. 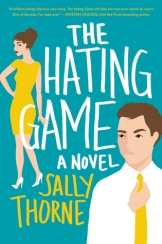 The Hating Game by Sally Thorne

Synopsis: Lucy hates her coworker Joshua. He’s her exact opposite in every way: he’s uptight, unlikable, and critical of everything Lucy does. The two of them play these subtle and petty games with each other, and Lucy can never seem to get an edge over her nemesis. So when Lucy and Joshua are up for the same promotion, Lucy decides to change her strategy. But soon Lucy starts to discover that hating someone can feel a lot like being in love with them.

My Thoughts: This book is real steamy, so if that’s not your cup of tea, this book is probably not for you. The office rivalry/romance makes this book a quick page turner, and Lucy’s character development is admirable. Joshua will surprise you, but you may also be rooting for Lucy to slap him. I adored Sally Thorne’s writing style; it made this book so much more than another chick lit romance. 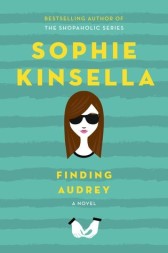 Synopsis: Audrey suffers from social anxiety disorder and depression. After being traumatically bullied at school, she can no longer leave the house or make eye contact, hence the dark sunglasses she wears even around her own family. But then her brother’s friend Linus starts writing notes to her and soon he challenges Audrey with little dares: go to Starbucks, make foot contact with someone, ask a stranger directions to the circus. It’s not long before Audrey feels ready to reenter the real world, despite her therapist’s warnings of doing too much too fast.

My Thoughts: Sophie Kinsella is officially one of my new favorite authors. Audrey’s home life will crack you up, and the sensitive way she covers mental disorders will also soften your heart. The characters in this novel were all so lovable (especially Linus), and I’d love to be a fly on the wall during one of Audrey’s mother’s freak outs. 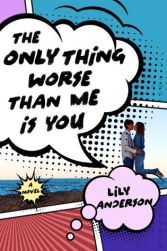 The Only Thing Worse Than Me is You by Lily Anderson

Synopsis: Trixie and Ben are lifelong enemies, academic rivals, and intellectual equals (although don’t bring that up–it’s a sore point). It’s their senior year and neither of them wants to be outranked by the other. So when their best friends start dating each other, forcing Trixie and Ben to hang out together, it seems impossible that they will ever act civilized in each other’s company. Until one of them overhears a huge secret that changes everything.

My Thoughts: I didn’t realize until a few chapters in that this is a nerdy YA retelling of Much Ado About Nothing, my favorite Shakespearean comedy. There is plenty of witty banner, disguises, and mischievousness occurring both on and off the page that will keep you entertained. My only problem with this novel was a lack of suspense (which is really just because I loved the webseries adaptation Nothing Much To Do and how it handles the big scandal. I can’t help comparing it to every other retelling). 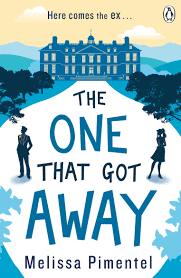 Ruby and Ethan were perfect for each other. Until the day they suddenly weren’t.

Now, ten years later, Ruby is single, having spent the last decade focusing on her demanding career and hectic life in Manhattan. There’s barely time for a trip to England for her little sister’s wedding. And there’s certainly not time to think about what it will be like to see Ethan again, who just so happens to be the best man.

But as the family frantically prepare for the big day, Ruby can’t help but wonder if she made the right choice all those years ago. Because there is nothing like a wedding for stirring up the past…

The One That Got Away by Melissa Pimentel
Published August 22, 2017 by Penguin
Format: Netgalley e-book; 352 pages
Fiction/Romance/Retellings
Also By This Author: Jenny Sparrow Knows the Future, Love by the Book
Goodreads
My Rating: ♥♥♥♥

The One That Got Away is a modern adaptation of Jane Austen’s Persuasion, a classic tale of love revisited. Melissa Pimentel reimagines Persuasion in her own way, turning quiet and humble Anne Elliot into determined and witty Ruby Atlas. Captain Wentworth has evolved into Ethan Bailey, a Forbes magazine featured technology entrepreneur, who, I was happy to discover, treated Ruby much more warmly than Wentworth treated Anne after their angsty decade apart (I love Captain Wentworth, but even he acknowledged that he was rather cold to Anne).

The One That Got Away alternates between the present, where Ruby and her ex Ethan are awkwardly reunited for a week in England to celebrate the wedding between Ruby’s sister and Ethan’s best friend, and past flashbacks covering Ruby and Ethan’s short, but passionate romance. Ruby is forced to confront her lingering and unrequited feelings for Ethan while surrounded by her family and their own erupting problems, all the while suffering over the real, secret reason she broke up with Ethan ten years ago.

When I first heard about this novel from a friend, I knew I had to read it. Persuasion is one of my top five favorite novels, and therefore it’s practically sacred to me. I’ve read three other Persuasion retellings (here are my reviews of Amelia Elkins Elkins and The Last Best Kiss), as well as two blog retellings (Half Hope and Only Annie), and the only time I was disappointed was while reading For Darkness Shows the Stars. I won’t give any spoilers, but Kai alters something that I didn’t agree with ethically.

I thoroughly enjoyed The One That Got Away. Ruby was an entertaining narrator, and her and Ethan’s relationship felt real and bittersweet. I was pleasantly surprised by how Melissa Pimentel improved the minor characters, specifically Ruby’s family, and strengthened relationships instead of severing them as I had expected.

…you are open to retellings of classic literature.
…you are not opposed to cursing and sexual references in books (I’d rate this book PG-13, with a generous dose of the f-bomb).
…you enjoy unrequited and lost love stories.
…you are in a slump and need a book to lift your spirits!

She dwelled on the way he smiled when he saw her, like she was made of a million tiny stars.

I was reading through two historical fiction novels lately; one is a Pulitzer Prize winner and the other is the final installment in a series that I love. But they both deal with dark eras in history that have reemerged as current events, and I have been struggling to keep myself together dealing with real-life, let alone fictionalized accounts, of war, racism, and hatred.

Sometimes I feel overwhelmed by my feelings and convictions and I just want to turn my compassion meter off so I can recuperate. This in turn makes me feel guilty and then I find myself in a vicious cycle, alternating between anger, hopelessness, and self-loathing. This is not healthy. As guilty as I felt for wanting to escape, I’m glad I did.

I will still finish those other two novels I’ve been reading, because they’re powerful and important, but it was refreshing and uplifting to read The One That Got Away by Melissa Pimentel. If you need a pick-me-up to get you through the end of summer, I’d sincerely recommend this one!

What are some novels that have helped you escape from the burdens of reality? And if you know of any other worthy Persuasion retellings, please share them with me!