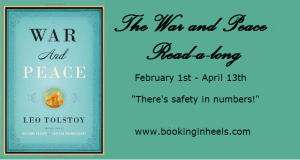 Hanna from Booking In Heels is hosting a read-along of War and Peace through February, March, and half of April, and I am one of the bloggers crazy enough to join in! Honestly, it’s not as bad as I always imagined it would be, although it can be pretty daunting.

Unfortunately, I was behind in my reading for this past week! I think that can be attributed to the fact that this weekend I was busy doing Valentine’s Day festivities with my hubby (so totally more important that Tolstoy), but also…there were TONS of loooooong war chapters this week, am I right? It took me most of the week to get through Book Two because it was full of war strategies and history lessons. Book Three was much easier to get through.

[spoilers below for Books 2 and 3 of War and Peace!]

The biggest happenings in Books Two and Three are the marriage of Pierre and Helen (ugh), Marya’s rejection of Anatole (YES!), and the Battle of Austerlitz, where the Russians suffer a huge defeat.

1. Do you feel that the tone of the novel has changed this week? Has that affected your enjoyment?
Book Two was sooooo long and honestly I got pretty tired of all the war descriptions. I was longing for Book Three because they included several “gossipy” chapters (that’s what I’m calling them from now on since they feature the two-faced gossipy characters) where some more interesting plot points unfolded. But the last half of Book Three brought us back to the war front, but at least it was a tad bit more exciting.

2. Do you feel comfortable telling other people that you’re reading War & Peace?
Absolutely. I just don’t like being applauded for reading it. Yeah, it’s a big personal accomplishment for me, but I’m not reading it to be impressive. I’m reading it because I genuinely want to.

3. How do you feel about Helene and Pierre’s marriage? Happily ever after or mildly doomed?
Totally doomed. I was practically yelling at Pierre to open his eyes and realize how badly Prince Vasili was playing him. But now that they’re married, I would love for it to work out. I just don’t think it will.

4. Should Marya have married Anatole or should she have stayed at home with her father?
As much as I dislike Marya’s father, Anatole is a huge egotistical jerk. I love Marya; even though she’s naive as anything, she’s also pure of heart and completely selfless. I’m holding onto the hope that one day she’ll marry someone who is actually honorable (is that an impossible hope? DON’T TELL ME!)

“My vocation is to be happy with another kind of happiness, the happiness of love and self-sacrifice.” – Marya

5. Andrei has featured in a lot of the war-related chapters so far. Do you think he’ll ever make it to military greatness?
I am now a quarter of the way through this novel and I STILL don’t know how I feel about Andrei. I don’t necessarily like him, but I don’t dislike him either. I think he could be a great military figure, but will he succeed in that? *shrugs*

Ok, I hope this week’s chapters are more captivating than last week’s were! How are the rest of the Read-Alongers doing??

I recently heard about a War and Peace read-along hosted by Hanna at Booking In Heels and since I know this novel will be much easier to read with a group of other bloggers than it would be to read it on my own, I have decided to participate!

As you can see, it is a two-and-a-half month-long event, so we only have to read 1-2 books a week (there are 15 plus 2 epilogues), which is doable.

This week we read Book 1, and since I have never read anything by Tolstoy or any other Russian novelist, it took a lot of effort to keep track of all of the characters (there are plenty), as well as figure out how to even pronounce their names.

[spoilers below for Book 1 of War and Peace]

The main plot points that take place during Book 1 are the death of Count Bezukhov, the legitimacy of his son Pierre (who is then able to receive the Count’s inheritance, much to the shock of the rest of the family), and the deployment of Prince Andrew.

“I am a woman, and you think we are all stupid;” – Princess Katishe

If you’re interested in reading along with us, it’s not too late to join! Click here for the schedule.