This week’s Top Ten Tuesday meme, brought to you by The Broke and the Bookish, is all about rereads! I love rereading books, sometimes I even reread books right after I finish them for the first time. Other books, like Anne of Green Gables or Jane Eyre, I reread during specific seasons.

Here are some of the books I’ve been wanting to reread for a while now:

A Separate Peace by John Knowles – I read this book in 7th grade and it really made an impression on me. I wonder how I’ll feel about it after a reread.
Great Expectations by Charles Dickens – I have only read a couple of Dickens novels, but this is one of his best. I have forgotten most of the story since first reading it in 8th grade, so hopefully a reread will correct that.
The Harry Potter series by J. K. Rowling – I’ve already reread Harry Potter once after the last novel was released, but during Halloween we watched the two Deathly Hallows movies and now I’m holding myself back from rereading the series again. I have so many other books on my TBR list, but I’m hoping I’ll have more time during Christmas :)
The Stranger by Albert Camus – Another novel I remember little from, the reason I want to reread this is because of its cultural importance & my ties to France.

As You Like It by William Shakespeare – My first ever Shakespeare play! My amazing 8th grade teacher had us read this play in class before going to see it performed on stage. I’ll always credit Ms. Bowden as the one who originally got me to fall in love with Shakespeare.
The Little House on the Prairie series by Laura Ingalls Wilder – A childhood classic :) I haven’t read these books since I was probably 9 or 10, but I loved them and I really want to experience them again.
Our Town by Thornton Wilder – I read a lot of good books in middle school! This one also really impacted me when I first read it. I think I’ll probably cry when I reread it.
Where the Red Fern Grows by Wilson Rawls – I know I’ll cry when I reread this one. I was a mess when my 3rd grade teacher read this to our class. Tissues everywhere.

BONUS! Here are two TV series I want to rewatch: 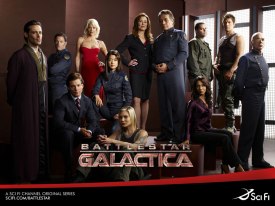 Boy Meets World – My favorite TV show while growing up! I’ve rewatched multiple episodes since the show ended, but I’ve never rewatched them all.
Battlestar Galactica – Matt and I had a Battlestar Galactica marathon back in 2012. We watched the whole series in less than 3 weeks, and I loved how it ended. Since then I’ve been wanting to rewatch it in order to pick up all the clues along the way.

What are some of the books and tv shows you’ve been wanting to reread/rewatch lately?