Greetings from Florida! This post is coming from the good ‘ol Sunshine State, where I will be until tomorrow. Our trip to the States has been wonderful thus far, and I am quite sad that we will be headed back to la France in a week, but it will be nice to see our puppy again after so long.

This post is also coming from our brand new iPad that my parents surprised us with for Christmas! It is convenient writing from here :) 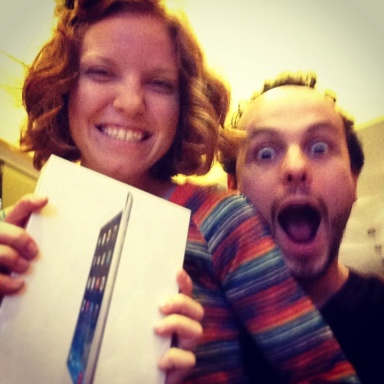 I was genuinely shocked!

Check back later next week for my “Visit to the States Bucket List” (yes I made one before flying over here–I know all you expats can relate), but for now enjoy this fun little piece all about the most interesting search terms that have brought readers to my blog. I can’t take credit for this idea, but hopefully it will bring you some smiles all the same :)

This is how he still likes to wake us up each morning :)

And there you have it! Maybe next year will turn up some funnier searches :) Hope you all are having a wonderful holiday season! I myself hope to get back into blogging more often in the new year; right now I’m too engrossed in library books! 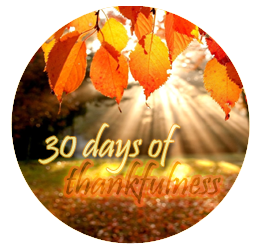 Today I am thankful for my puppy!

For those of you who know me personally, you may be a bit surprised as to why it took me so long to post about being thankful for my dog ;) Matt and I love our Australian Shepherd as if he was our actual child, which may be normal for American standards but that is not very common behavior over here in France.

Han Solo (Solo for short) has brought so much joy into our lives and I am thankful for him every single day. And yes, he is named after my favorite Star Wars character!

And here are some pictures for anyone needing/wanting a puppy fix :) 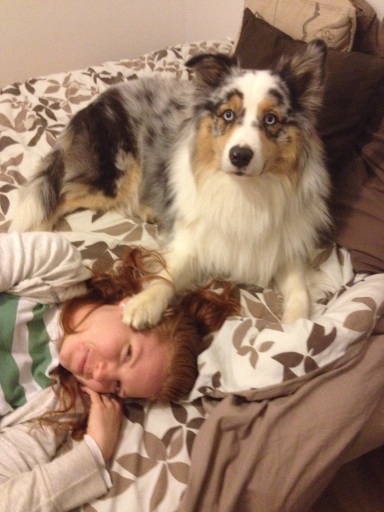 …but how can you not love that dramatic puppy face!

In my last post, I talked about how last weekend Matt and I wanted to go hiking and maybe do some “crafts” for the home. Well…it rained. All week it was sunny and hot and then the weekend rolls around and it’s cold, foggy, and rainy outside. And today I wake up to a light drizzle again! This time it’s supposed to rain  most of next week, too. The weather app on my phone is looking bleak…

But Matt tells me this is how April is here. A random cycle of hot sunny days, foggy rainy ones, and snow! Yay. I live for the few days that feel like spring…but at least there are flowers everywhere! Except for that tree I loved. It’s full of leaves now.

Some things we’ve been up to lately: I’m still babysitting my 19-month old niece and she has entered the “No” phase! But overall she’s a good baby, and she tells you exactly what she wants so it’s not so bad! She has also started telling Solo to stay, assieds (sit), and au pied (heel)! She has even told her dad to stay!!! Also, we saw Iron Man 3 the other night (IN ENGLISH!) and I loved it. You Americans will have to go see it next week!

So, to make up for this yucky weather, I’m going to post a “glamour shoot” I did with Solo two weeks ago. Enjoy!

He really dislikes being in the sun, so this was him posing under a tree, with some leaf stuck in his teeth.

Our mountain pup “in the meadow”

Fun fact: there are two soccer fields at this park (you can see the more professional one in the back), and Solo is terrified of the games…something about the whistling and all of the people yelling and running around. I’m sure Matt has something to do with this since he, too, hates soccer… 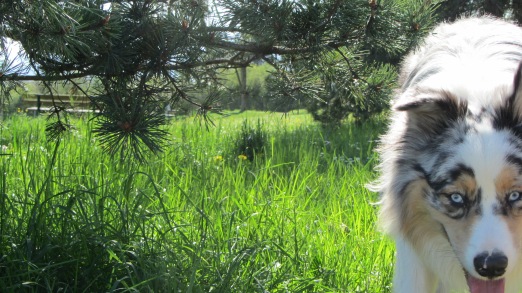 And this is his “Ok, no more pictures!” pose 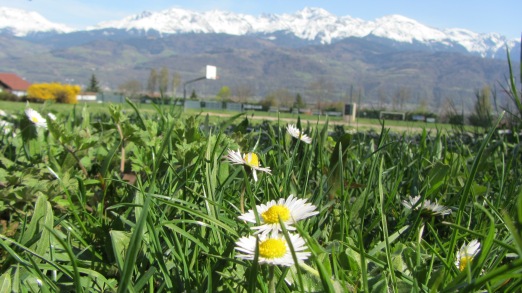 Not a cloud in the sky…

Matt and I are blessed to be apart of a student ministry here in Grenoble called Remix. It’s similar to Chi Alpha (the student group we were apart of in the U.S.), but quite different at the same time because it’s in France. This past weekend we went on a leadership retreat about an hour away in Bourg d’Oisans where we began planning and discussing upcoming events. The most significant thing for me, however, was the time we took at the end of the retreat to encourage and pray for each other. It was moving and interesting because not everyone knows one another very well, but that didn’t keep us from lifting each other up.

During one of the women’s retreats I went to while I was in Chi Alpha we had a night of encouragement too, but there were around 25 of us total, so you can imagine the tear-fest we had!

While we were in Bourg d’Oisans we also got to PLAY IN THE SNOW! And there was tons of it. I’ve been skiing before but I don’t think I’ve ever seen that much snow in my life. We’ve been so excited for Solo to be able to play in the snow, because we were absolutely certain that he would love it. And we were right! He played for hours and hours outside by himself, and the best part was that since he couldn’t dig or play in the bushes, he didn’t get dirty. The snow would stick to him in little balls, though, but he would lick them off of himself!

I was all excited about taking pictures but after the first 60 or so I realized that I had somehow set my picture size to SMALL. Like 640×360 pixels small. I was really upset because I had taken some nice photos, but I took a lot more later to make up for it :)

Here are some of the best pictures from this weekend, both small and large (I only took pictures outside):

This is what it looked like before we played in the snow. 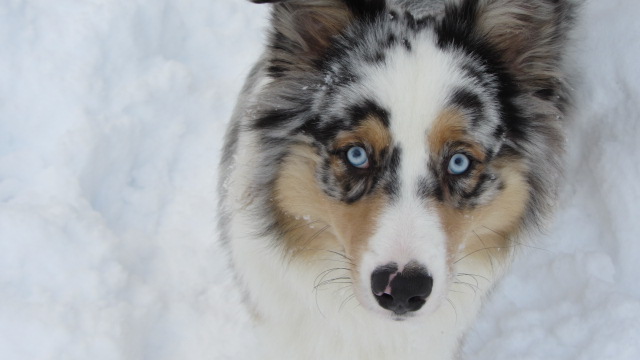 Solo leading, like always. He actually wasn’t too fond of people riding the sled. When Matt and I went together he ran behind us and barked the whole way.

Matt after he made a bunch of snow fall off a tree–onto himself ;) 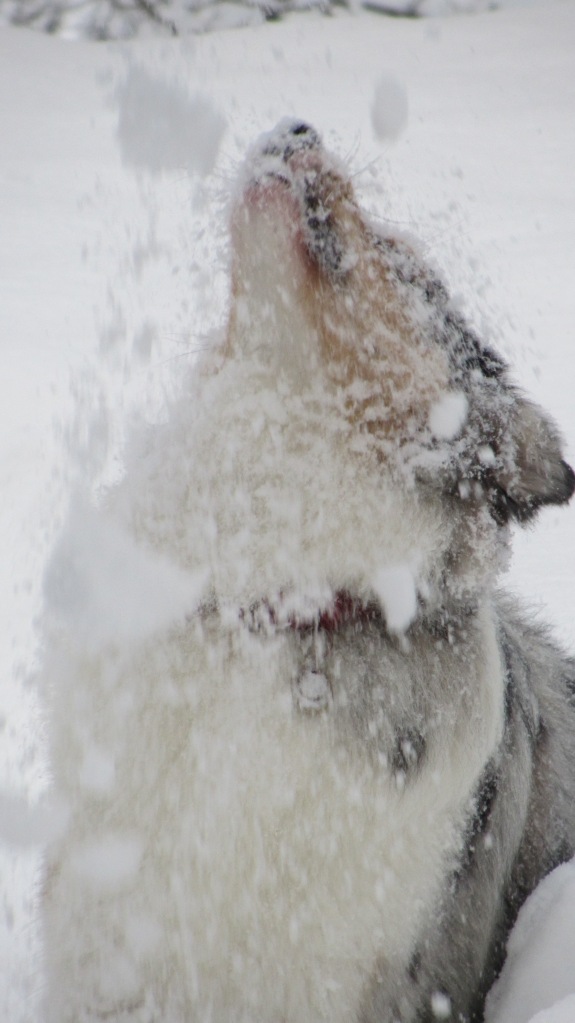 This was Solo’s stash of firewood…

I love that you can see the curves of the mountains so perfectly!

We’ve had our Australian Shepherd puppy Solo for three months now and we’ve been wanting to sign him up for some puppy classes. We train him on our own but there are a few things, such as light biting, jumping on strangers, pulling on a leash, and not always obeying us, that we want help in improving.

In Grenoble they offer free lessons with a trainer who we went to see two weeks ago. The only thing they ask in return is for dog owners to help keep the city clean by picking up dog poop; easy enough since we already do that. From the moment we met the trainer I was already getting a weird vibe from him, and then I found out why. He’s an older man who believes in negative reinforcement when it comes to dog training. That’s not how we’ve been training Solo and I haven’t read anything encouraging owners to train that way. The only lesson we had was leash training, and his method was to walk with the dog and when he strays too far from you you yank the leash back until the dog is at your side. One time he did this too harshly with Solo and he yelped. I don’t see how that is good for the dog’s neck or how that’s supposed to encourage the dog to trust you or obey you when he’s not on the leash. Needless to say, we decided right when we left that we were not returning.

So this past week we contacted another trainer, who owns an Australian Shepherd herself and who uses clicker training coupled with positive reinforcement. She came over to our apartment to meet us and Solo and she gave us a lot of helpful information. Solo, like with every other living thing he encounters, liked the trainer right away, especially after she gave him lots of treats! We’ll be meeting with her once a week now and hopefully Solo will be able to do everything that the trainer’s own dogs do (the trainer’s website had demonstration videos with her Aussie walking at her side all over town, crossing the street when told instead of darting across, and even waiting outside by herself while the trainer was in the bank)!

She was impressed with Solo–mainly his size!–when she met him, since he already knows quite a few commands. He’s a smart dog and Aussies are a smart breed so we know he’ll benefit from puppy training a lot. One thing is for sure: owning a puppy requires a lot of patience! Having Solo is definitely helping us prepare for parenthood one day. 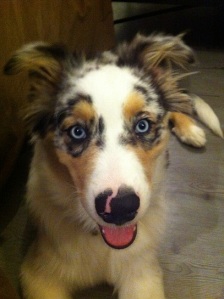